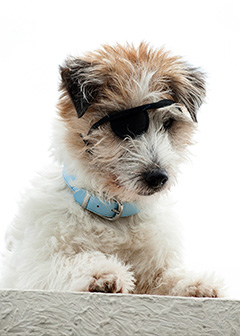 As soon as he read The Menkoff Method script, Luke knew the dog for the job – a little Jack Russell named Peabody.

“The bar was raised because he had to wear an eye patch, but I knew Peabody had worn goggles before so he was used to having things over his eyes. Once he got used to the patch we had to teach him the other things he had to do.”

Peabody is a food orientated dog. For a little piece of his favourite treat he’d crawl through air conditioning ducts and bark on command. His favourite was hot dog.  Luke says that he can train some dogs for a specific job in an hour or two, but you have to be careful not to over train the dogs.

“You need to leave the dog’s natural creativity. Once they lose that they lose a lot of the magic.

Like humans, dogs can have bad days. “Part of my job is to keep the motivation going. I can feel what the dog’s feeling if he’s confused or not comfortable. I need to rebuild the animal’s confidence. It’s an important part of the training to feel what the dog is feeling.”