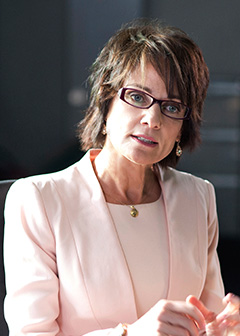 Catherine McClements wasn’t worried about the adage of not working with children and animals. She spent a lot of time on set with Peabody, who played her dog, Charlie.

“He’s done a lot of work. He’s very professional,” she jokes.  Like most actors, Catherine says Peabody was clearly nervous on his first day on set. “He smelt everything. This building must have been full of all sorts of smells.”

She is also full of praise for newcomer Lachlan Woods, saying he doesn’t have that “first time” feel at all. “He’s very much in control. He’s a smart guy. It’s been a pleasure working with him.”

Catherine’s character meets a very grisly end and she worked with stunt co-ordinators Reg Roordink and Chan Griffin to bring realism to the scene.

“I’ve been shot a couple of times. Actually I’ve been killed a bit, but usually with can openers or shards of glass.”