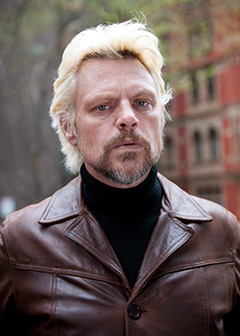 Mal Kennard took on a very new look for the role of Karpov, becoming a ‘bleached’ blonde with very dark regrowth.  He perfected his Russian accent talking to Eastern European friends and working with co-star Olga Makeeva.

Karpov is also a challenge because he is so different to Mal. Those differences stretch Mal as an actor, the thing he thrives on.

“Karpov is a killer, something so removed from me, and the accent. It all added to the appeal of the role. And there is comedy, and you don’t get to do that every day of the week. It’s good to do something you haven’t done before. That’s appealing. If you want more fun in your life, get the KGB involved!”

Mal took to the role of Karpov with such a zeal he would drop into his Russian accent when he least expected to – when not on set!