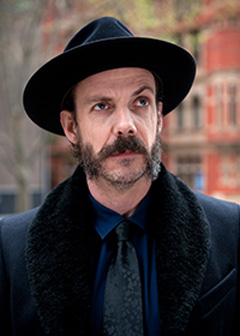 Noah Taylor, one of Australia’s most accomplished film actorsreturned to Australia during a break in filming Game of Thrones in Northern Ireland, to play Max Menkoff.

He was drawn to The Menkoff Method because of the comic aspects of the characters and the fact it was a small scale Australian film. “They are always more fun to work on. Game of Thrones is an epic production and a lot more formal. And the Aussie crews are always good fun. It’s that shared sense of humour and cultural references you don’t get working overseas.”

There were plenty of stunts for Noah and he admitted that at 44 he isn’t as supple as he used to be. He says he didn’t have to wait until he got home to see the bruises after a day of action on the set. Playing opposite Chan Griffin, Noah saw his “amazing” martial arts ability. “He is extraordinary, playing my nemesis, the deadly Chinese assassin.”

After completing The Menkoff Method Noah returned to Northern Ireland to film more episodes of Game of Thrones before taking a break.