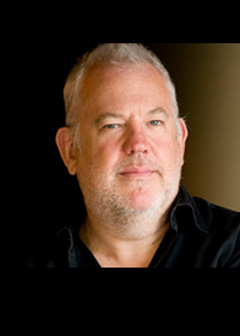 Paul and director David Parker have been friends for 25 years. They had many discussions about the style of the music.

“The writing process is a process of gestation. I am always thinking subliminally about the music so when it comes to the writing it all happens fairly quickly. I tweak my ideas and change them until David and I agree. It’s a bit like cracking a code. That’s the hardest part. The fun bit is recording it.”

Paul admits to not knowing much about the manga world but he and his family are big fans of Japanese anime, particularly the work of Miyazaki. “We have every film. It’s beautiful, poetic stuff. I love it.”

Paul penned the Endobank song prior to production beginning as well as the music used by Menkoff to hypnotise his victims. He said he could image thousands of Russians singing the Endobank song. “It’s the national anthem for a fictitious Stalinist nation.”